Han Chen is a shining example of a young person who is using the values and lessons learned from the Major Taylor Project to help his community. 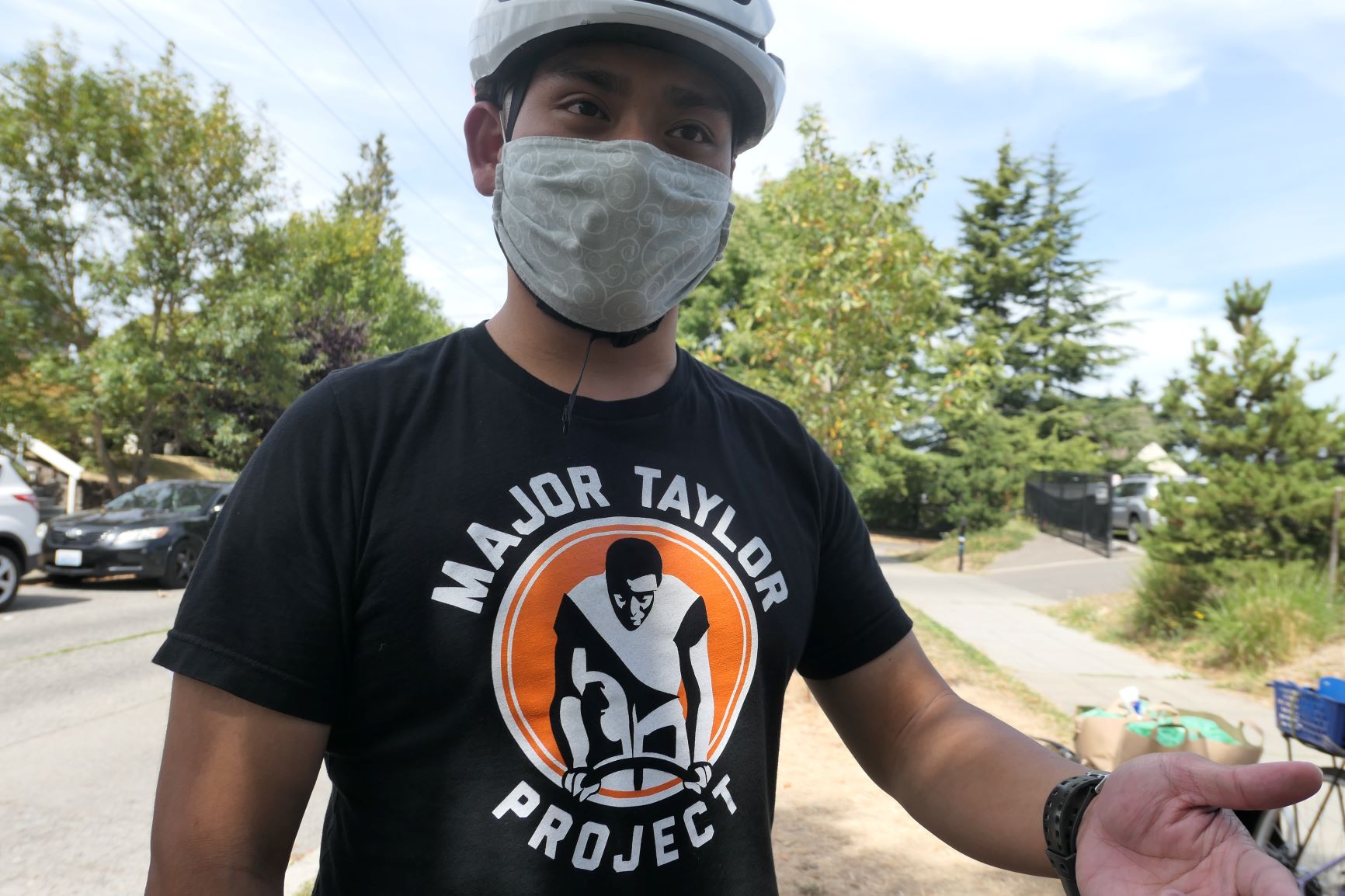 Chen, 22, locks up his bike and gets to work. He connects a trailer to another volunteer’s bicycle, then loads the trailer with brown paper bags filled with fruits and vegetables that will be distributed by bike to local residents in need.

"I see my bike as a tool for activism and community involvement," says Chen, a graduate of Cascade's Major Taylor Project (MTP).

Chen is a volunteer coordinator for Seattle Pedaling Relief, a grassroots initiative that enlists bicyclists to deliver food to households in need during the COVID-19 pandemic. “A lot of people are experiencing food insecurity during the pandemic, and I’m privileged to have the time and to be financially secure so that I can volunteer,” he says. 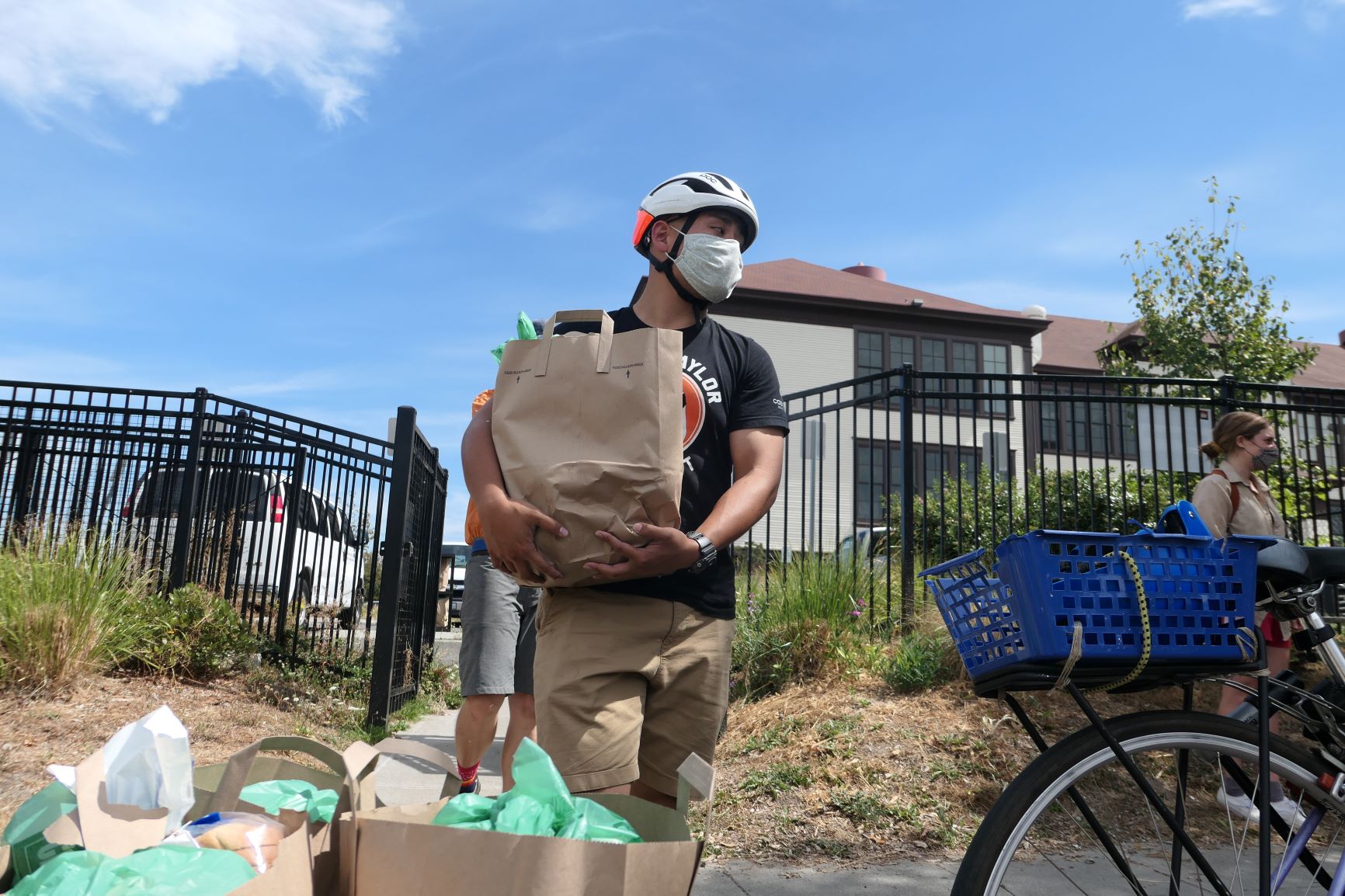 For Chen, community service is a duty, obligation, and honor. He is a humble hero who is using the values and lessons learned from the Major Taylor Project to help his community.

MTP is an after-school program in South King and Pierce counties that teaches students leadership skills through bicycling and which includes a Build-a-Bike program. Some students take on the challenge of riding the bike they’ve built 206 miles from Seattle to Portland.

Prior to the pandemic, which has put MTP’s in-school work on hold, MTP served about 500 high school students annually. Founded in 2007, the program has served thousands of youths during its 13-year existence. The project, which is named for Black bicycling legend and world champion racer Marshall “Major” Taylor,  focuses on underserved neighborhoods where residents speak more than 70 languages and represent more than 80 nationalities.

MTP has been in the news recently thanks to a $150,000 donation from the Rapha Foundation, and because of the Black Lives Matter movement, which has shined a light on the social and economic inequality faced by communities of color and the need for the bicycling community to expand its horizons. 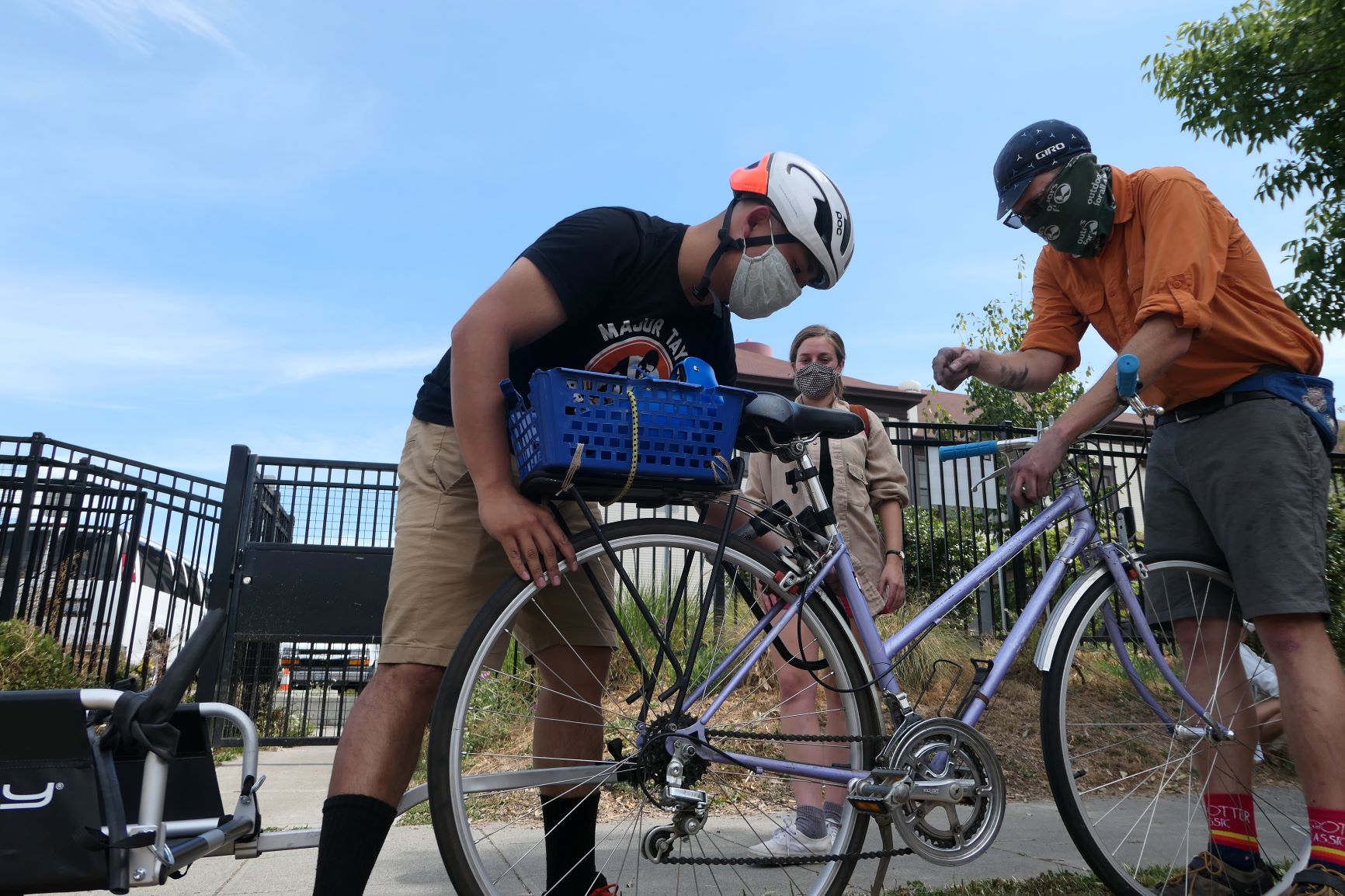 For Chen, participating in MTP while attending Seattle’s Franklin High School, and then serving as a mentor to other students as a ride leader for MTP, was a formative experience. “Being part of MTP was really important to me. When riding a bike you have to engage with your community--everything from the people to the streets, the parks, the potholes, the trees, the environment. MTP makes you more aware of your community, who is in it, what it looks like, what opportunities there are.”

Chen grew up in Beacon Hill, just a few miles away from El Centro de la Raza. A first-generation Chinese American, he was the first person in his family to graduate from college. He recently obtained an education degree from the University of Washington-Bothell. Education was a natural fit for Chen, who grew up multi-lingual, and who was often pressed into service translating documents and conversations for relatives.

“A lot of first-generation Americans not only become teachers and helpers to their parents, but also to their siblings,” says Chen, who has a younger sister.

Chen recently accepted a job offer at Lowell Elementary School in Seattle’s Capitol Hill neighborhood, where he will work as part of the school’s support staff. He cites MTP as a factor in his decision to pursue education as a career.

“Education is a crucial life skill in the first-generation community. It’s fundamentally a profession that helps, uplifts, and supports. I can point to numerous times in my formative years when an educator helped me become a better person. As an Asian man and Chinese-American man, I feel I can bring an important perspective to my work as an educator.” 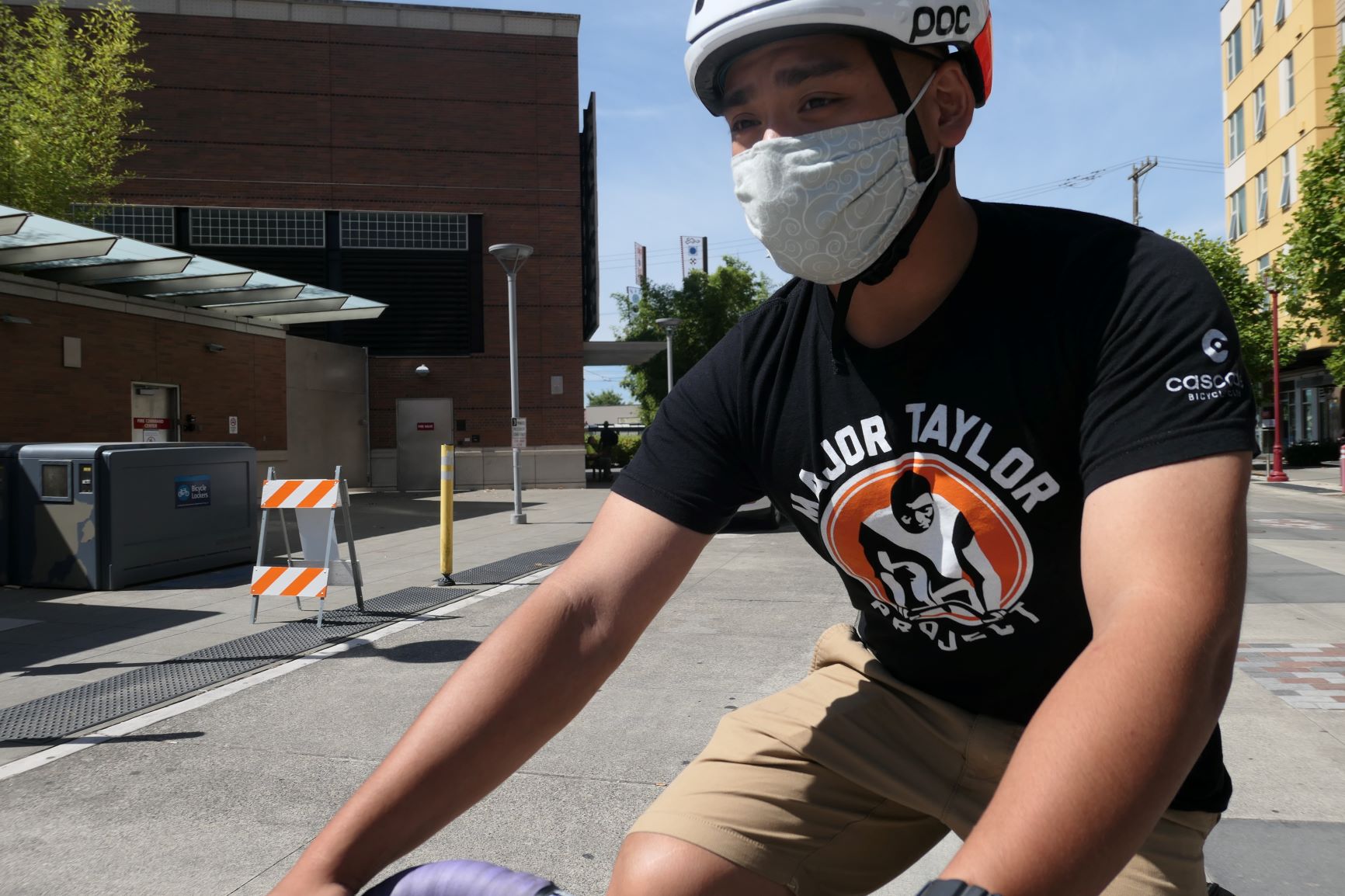 Chen still gets together for weekly rides with fellow MTP graduates from Franklin High School. A few days earlier, he and five other MTP alums rode the 50-mile Lake Washington Loop. “We all had a great time, and we remain good friends.”

Chen and his riding buddies are always proud to wear their MTP jerseys. “The MTP logo means a lot to us,” he says. “Every time we ride with our MTP T-shirts or jerseys people always say hello and wave. They know about the program. It’s good to be recognized and to feel seen. At the same time, there is a lot of responsibility and pride that goes along with wearing the jersey and MTP logo.”

Service is part of that responsibility. Chen previously worked for Goodwill, helping underserved youths obtain job skills. When not volunteering for Seattle Pedaling Relief, he has joined multiple Peace Peloton rides to support economic reform for Black People. “It is great to see lots of Major Taylor jerseys at the Peace Pelotons. Whenever you attend community related bike events in the Seattle area you always see Major Taylor graduates. MTP represents.”

Back at the El Centro de la Raza, Chen wraps up his work and prepares to ride south to the Rainier Valley food bank, where he will again donate several more hours of his time as part of the Seattle Pedaling Relief initiative. 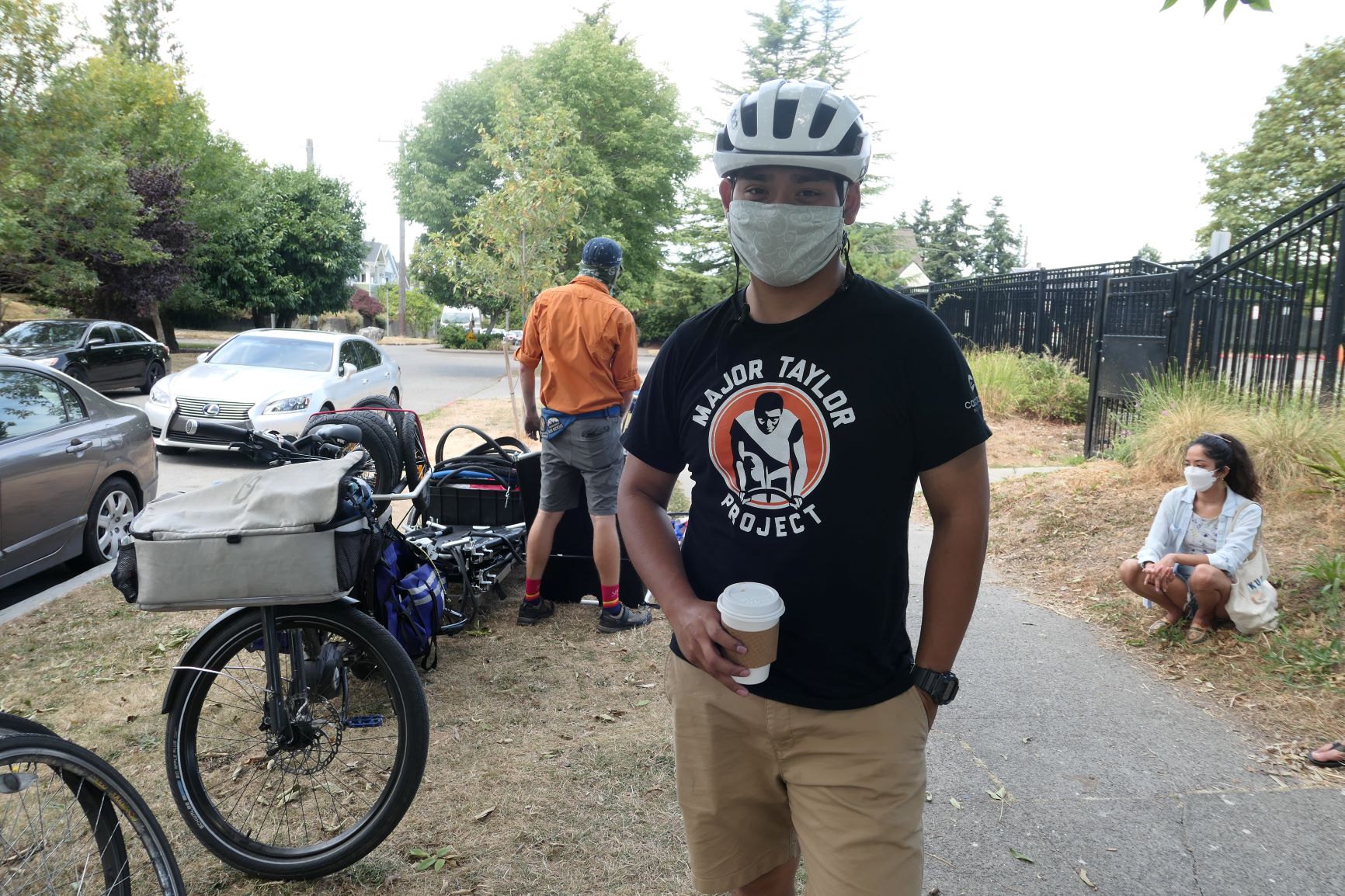 “Han is the best volunteer I could ever ask for,” says Maxwell Burton, co-founder of Seattle Pedaling Relief, and a Cascade contractor. “He has been at nearly every Rainier Valley food bank delivery, helping me to organize volunteers as a volunteer coordinator, doing safety briefings, and basically taking care of whatever needs to get done. He’s a total hero.”

A humble hero, with a utilitarian bike. While he has a nice road bike for long rides, Chen’s daily rig is a trusty old commuter bike that he bought used for $150 and plastered with stickers. “It’s a super cheap Trek 1400 aluminum. But it has lasted for so long and is great for getting around the city.”

Chen gets on the bike and pedals off to the Rainier Valley food bank, a young man with a bright future who is using his bike, and the values he learned as an MTP participant, to raise up his community.

Slow Rolling on Seattle’s Bike Network is Not Acceptable: Let’s Build With Urgency, and for Connectivity